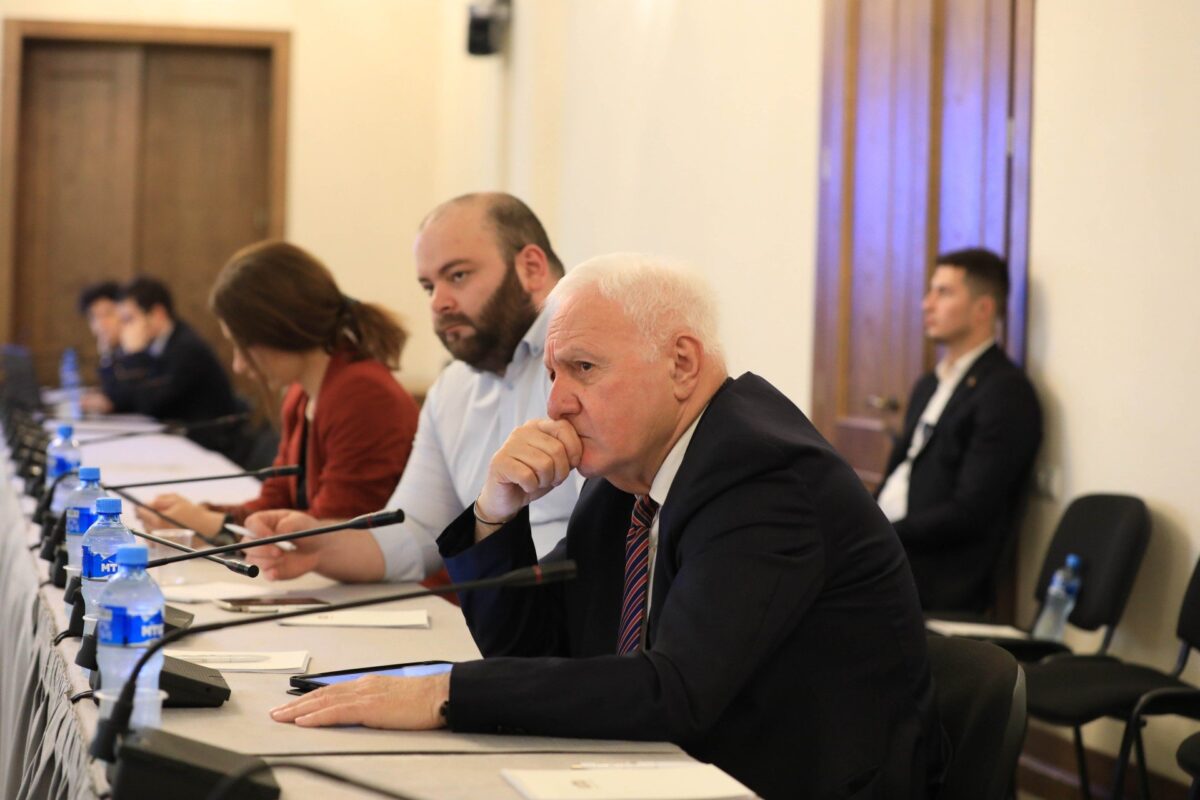 "The issue of deoligarhization is artificially introduced into the agenda of the day of Georgian politics, for the realization of personal narrow political goals". This was stated by the head of "European Socialists" Fridon Indzhiya at the meeting of the working group on judicial reform, which is headed by the Speaker of the Parliament of Georgia, Shalva Papuashvili.

The meeting of the working group on judicial reform is held periodically within the framework of the process initiated by the ruling party with the aim of implementing the 12 points of the recommendations of the European Commission.

According to Fridon Indzhiya, it is absolutely unacceptable for Georgia to adopt the law according to which a person who has received the status of an oligarch does not have the right to appeal to the court.

"We say that deoligarhization is a practice, but that's not the case. No experience in this. There is no such practice in any European country. I believe that de-oligarhization to a certain extent also affects the constitutional rights of a person," the deputy noted at the meeting.

According to Indzhiy, he considers an oligarch to be an oligarch who «illegally obtained income from state funds and thus became wealthy. For example, an illegal or biased tender was conducted, or the antimonopoly legislation was not properly applied, or he did not fully describe his assets and hid something, or he abused his official position and influence. All this together can be defined as an oligarch.

"If a person earns money on the basis of healthy competition, in full compliance with the antimonopoly legislation, in that case it is wrong to call a person an oligarch and evaluate his actions as illegal, while not giving a chance to defend his rights in court, provided by his own Constitution," Indzhiya emphasized. .

The head of the political group believes that on the way to the democratic development of Georgia, it is very important that the flawless implementation of the already adopted laws is carried out.

"We adopted almost all the laws that are in force in the USA, Germany or other European states, but their observance is important, and it is precisely in this part that we have a problem. No control, neither from the prosecutor's office nor from our side. For example, when a minister comes to the Parliament, he can answer part of the questions, and not answer the other part at all, and so leave the Parliament, while nothing changes, because there is no control. There is no control over the implementation of the antimonopoly legislation. Antimonopoly service, prosecutor's office, court, all structures must be at the necessary level. Judicial processes are delayed for several years. The process can last 5 years, and during this time the person can die, and the issue can lose its relevance... Now we are going to take as a basis the law of Ukraine on deoligarhization, while not a single country has experience of applying such a law", — said Fridon Indzhiya.

The deputy does not agree with the opinion that the granting of EU candidate status to Ukraine was connected with the adoption of this law. According to the deputy, this was only a political decision, and Georgia is under other political pressure.

Fridon Indzhiya emphasized that the political group "European Socialists" will definitely take part in parliamentary law-making activities, including actively being involved in the work of various parliamentary working groups, but in no case will it allow the adoption of an anti-constitutional law that violates human rights.

"It is not permissible to accept any law at the request, pressure or coercion, and our political party will always oppose such actions", - stressed Indzhiya. 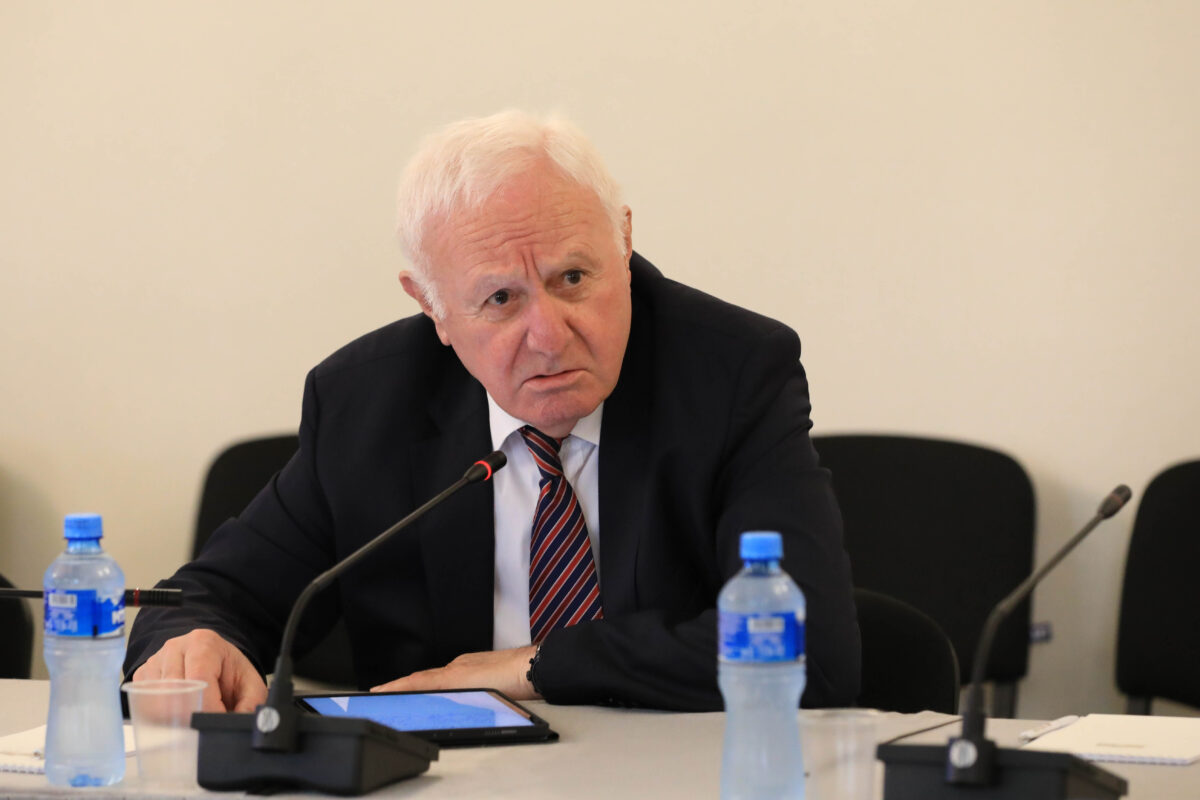 The head of "European Socialists" Fridon Indzhiya in an interview with the "Georgian Times" TV company spoke about the details of the meeting of the Georgian parliamentary opposition with the members of the delegation of the Committee on Foreign Affairs of the European Parliament, as well as about the actual issues of the implementation of 12 points of the European Commission resolution.

According to Indzhiy, at the meeting, members of the delegation voiced a request that all opposition deputies should join the process of implementing the recommendations of the European Commission.

"During the meeting, I asked the members of the European Parliament why such an unfair decision was taken in relation to Georgia. I am not talking about Ukraine, it is at war, and now there are other conditions, but Moldova, which is a member of the CIS, and the country's military neutrality is written in its Constitution, besides, Georgia is ahead of Moldova in all parameters, they gave it the status of a candidate... Where is the justice? ? Georgia participates in all NATO military operations, for the security of the Euro-Atlantic space and the well-being of Europe, 32 Georgian servicemen died, 400 were wounded and injured. Some EU member states do not participate in these operations and accordingly, they have no victims. This is unfair. They see everything...

With this decision, they strengthened the opposition in the country, if you say in their language, they strengthened the polarization. Polarization was invented by them for the purpose of handing over power in Georgia to destructive forces that have neither the support nor the trust of the overwhelming majority of the Georgian people. However, in this part of the opposition, there are people who really love Georgia", said Fridon Indzhiya.

The deputy reacted to the statement of the President of Georgia, Salome Zurabishvili, and noted that no matter how hard the country's government tried, they would still accept the resolution, because it was planned that way.

"Certain circles in the USA and the European Union want to change the government in Georgia. As for our president, she makes statements that don't concern her, and perhaps such rash statements will exacerbate relations even more, and some forces can use the president against the interests of our country," Fridon Indzhiya emphasized. 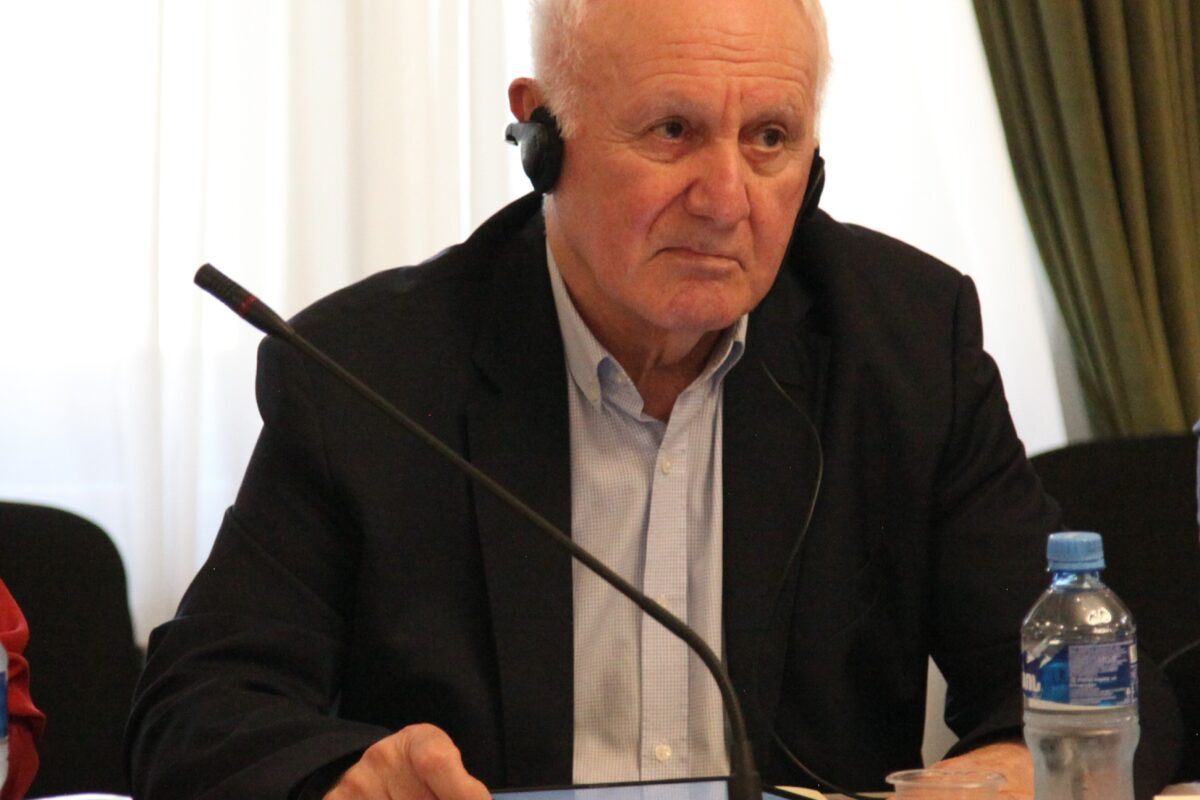 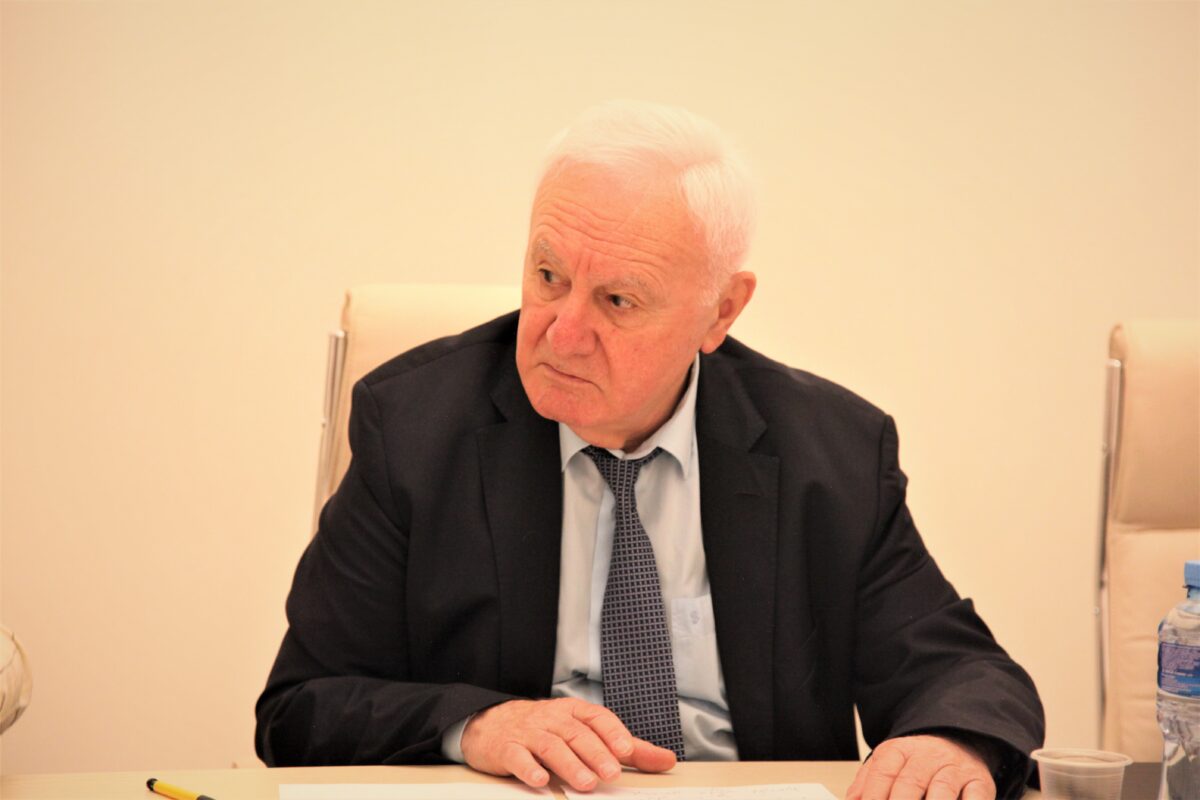 In an interview with "Georgian Times" TV company, the chairman of "European Socialists" Fridon Injia focused on the details of the meeting of the members of the delegation of the European Parliament's Foreign Affairs Committee with the parliamentary opposition and on the current issues of the implementation of the 12-point resolution of the European Commission.

As Fridon Injia said, the MEPs voiced a request that everyone should be involved in the process so that the recommendations of the European Commission could be implemented.

"I asked questions at the meeting about why there is such injustice in relation to Georgia. I am not talking about Ukraine, it is at war, and there are other conditions, but Moldova, which is a member of the CIS today and military neutrality is written in the constitution, besides, Georgia is ahead of Moldova in all parameters, it was accepted... where is the justice? Georgia participated in all NATO military operations, for the security of the Euro-Atlantic space and their well-being, 32 Georgian men were killed and 400 were maimed, while some EU member states did not participate in these operations, and there is no mention of victims at all. This is unfair.

Everyone sees this, and with this action, they intensified the confrontation, if we say in their language, they intensified the polarization. Polarization is invented by them in order to hand over the power in Georgia to destructive forces, which have neither the support nor the trust of the vast majority of the Georgian people. However, even in this part of the opposition there are individuals who really love Georgia", said Fridon Injia.

The deputy responded to the statement of the President of Georgia, Salome Zurabishvili, and noted that no matter how the government worked, this resolution would still be adopted, because it was planned that way.

"Certain circles of the USA and the European Union want to change the government in Georgia. That's what it's all about. As for our president, he makes such statements that do not concern him, and perhaps such immature statements of his will further strain the relationship and the president will be used against the country by some forces," said Fridon Injia. 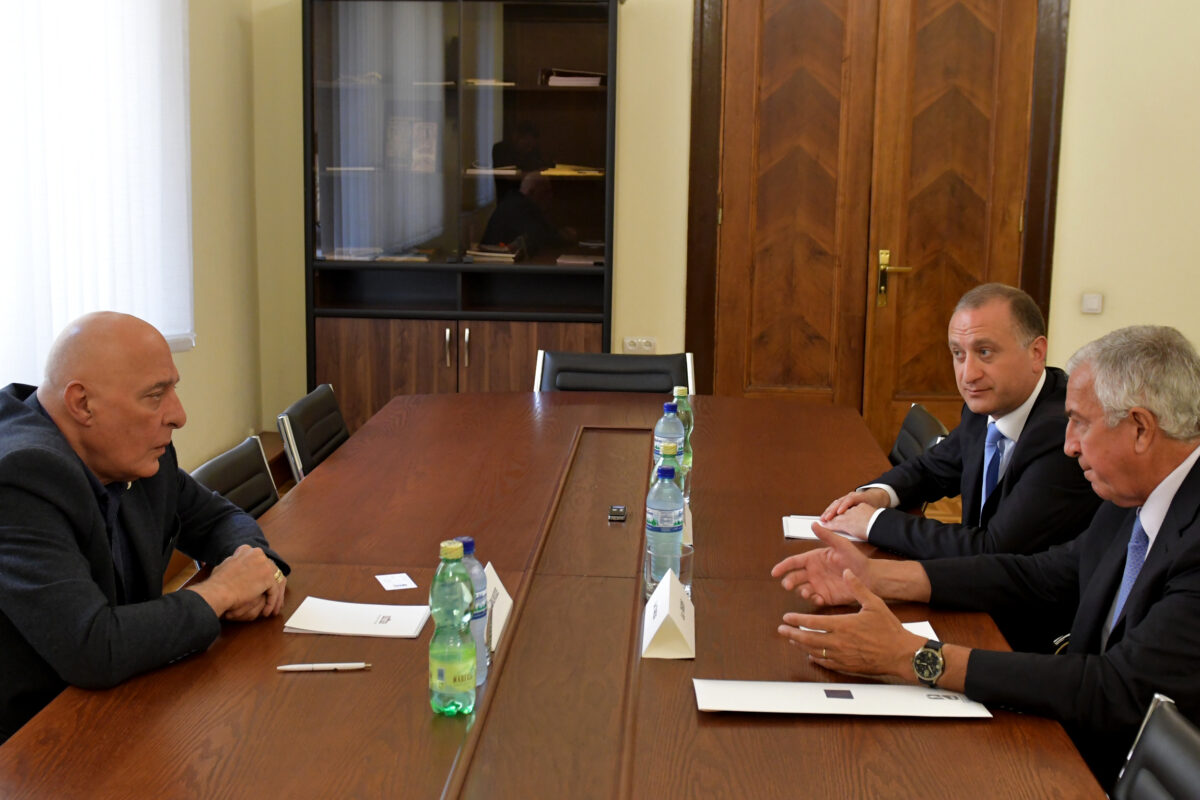 As part of Luke Tardifa's visit to Georgia, a Memorandum of Cooperation was signed between the Ministry of Culture, Sports and Youth of Georgia and the International Hockey Federation. The memorandum provides for the construction of an ice arena in Georgia.

Vice-speaker of the Parliament Avtandil Enukidze, who is also the vice-president of the National Hockey Federation of Georgia, thanked Luke Tardifa for his visit and the support he provides to Georgia in the development of this sport.

"We estimate the activity of the president of the MFH at a very high level. In Georgia, hockey is not very developed at this stage, so his attention is a great honor for us, and we are very grateful for it. As the Deputy Chairman of the Parliament, as a Georgian and as the Vice President of the Hockey Federation, I thank Luke Tardifa for everything", Avtandil Enukidze noted at the meeting.

"Today in Georgia, great attention is paid to the development of all sports. I personally talked with the Prime Minister, and, in fact, a decision was made about the construction of hockey arenas in our country, and you can be informed about the progress of these works. Тем более, что вы продукли проводы, за что что еще раз большое вам спасибо", Avtandil Enukidze noted.

As noted by the president of the International Hockey Federation Luke Tardif, he first came to Georgia 10 years ago to take the first steps, and Georgia was able to start playing in the world championship.

"After 10 years, I see great progress and changes, which makes me very happy. In these 10 years, systemic changes have occurred, a whole system of this sport has been created, which did not exist before," said Tardif.

According to him, he sees the character necessary for team and strength sports in Georgians, and he believes that Georgia will achieve the same success in hockey as in rugby or basketball.

«I am glad that the hockey arena will be built in Georgia. Now Georgia needs to start the second stage of hockey development. It is necessary to start raising a new generation, and for this it is necessary to create infrastructure. I would like to see Georgia play in the top division in a few years. There will be youth teams, women's teams... I think that the government of Georgia has a very good concept, in particular, palaces of many types of sports will be gathered on one territory, including an ice arena. The projects that I heard about in Batumi, Tbilisi, and Bakurians will be the beginning of the jump to the second stage, and I will help you in every way to bring all this to life," said the head of the International Federation, emphasizing that in 2-3 years, when The construction of the infrastructure is completed, it is quite possible to hold the world hockey championship, since Georgia has good experience in conducting world-level competitions.