"The issue of de-oligarchization has been artificially introduced into the agenda of Georgian politics, in order to achieve narrow political goals." Fridon Injia, the chairman of the parliamentary political group "European Socialists", announced this at the meeting of the judicial reform working group under the leadership of the Speaker of the Parliament of Georgia, Shalva Papuashvili.

🔹The meeting of the judicial reform working group will be held periodically and it is one of the parts of the process initiated by the ruling party within the framework of the implementation of the 12-point recommendations of the European Commission.

🔹 Today's meeting was held in the highest legislative body of the country to develop the law on deoligarchization.

🔹 At the meeting, the law on de-oligarchization in force in Ukraine was presented as a sample.

🔹 According to Fridon Injia, it is completely unacceptable for Georgia to adopt such a law, according to which a person granted the status of oligarch does not have the right to appeal in court.

🔹 "We say that deoligarchization is a practice, this is not a practice. There is no experience of this. It is not in any European country. I believe that de-oligarchization is unnecessary and to a certain extent it also affects the constitutional rights of a person", said Fridon Injia at the meeting.

🔹 According to him, he considers an oligarch to be a person who "illegally received income from state funds and thus became rich. For example, the tender was conducted illegally or biased, or the anti-monopoly law was not properly applied, or this person did not have his assets fully described and hid something, or abused his official position and influence. All these together can be the definition of an oligarch."

🔹 And, according to Fridon Injia, if a person earned money on the basis of healthy competition, in full compliance with the normal anti-monopoly law, in such a case, it is wrong to call a person an oligarch and to evaluate his actions as illegal. In addition, you did not even give a chance to protect the rights granted by your own constitution in court.

🔹 The chairman of the political group believes that the perfect implementation of the adopted laws is important in the way of democratic development of Georgia.

🔹 "We have adopted almost all the laws that are in America, in Germany or in other European countries, but here it is important to implement them, and it is in this part that we have a problem, which is manifested in the fact that the laws are not actually implemented. Laws are not implemented from different sides, or there is no full control from the side of the prosecutor's office, or from our side, the parliament. For example, when a minister comes to the parliament, he can answer some of the questions, some can not answer at all and leave the parliament, and nothing changes because there is no proper control. There is also no control over the implementation of the antitrust law. The antimonopoly service, the prosecutor's office, the court should stand in their place. The process has been going on in court for years. The process may take 5 years, and during this time a person may die and the issue may lose its relevance. There are many other such laws that the country needs to function," said Fridon Injia.

🔹 According to the chairman of the political group, now we are going to take as a basis the law of Ukraine on deoligarchization, while no country has any experience of applying a similar law.

🔹 Fridon Injia does not agree with the opinion that the granting of the EU candidate status to Ukraine was determined by the adoption of the law on de-oligarchization. According to the deputy, "Granting the status of EU candidate to Ukraine was only a political decision and, by the way, Georgia was included in this political part, which is under other political pressure."

🔹 According to Fridon Injia, the Prime Minister of Georgia Irakli Gharibashvili addressed an official letter to the President of the European Commission, Ursula von der Leyen, and asked for clarifications regarding the recommendations of the European Union in relation to Georgia, and among them, he emphasized the issue of specifying the concept of de-oligarchization.

🔹 "The Prime Minister wrote to the President of the European Commission to clarify some issues for us... It turns out that in Georgia there is no parliament, no government, no court, and no one. There is only one Ivanishvili and the opposition... We must respect ourselves, first of all, to stand at the level of being truly chosen by the population and worthy citizens of our country," Fridon Injia added at the meeting.

🔹 He emphasized that the political group of "European Socialists" will definitely take part in parliamentary law-making activities, including actively involved in the work of various parliamentary working groups, but the political group will in no case allow the adoption of such a law that is anti-constitutional and violates human rights. It is not allowed to adopt any law at the request, pressure or coercion of others, and our political power will always oppose such actions." 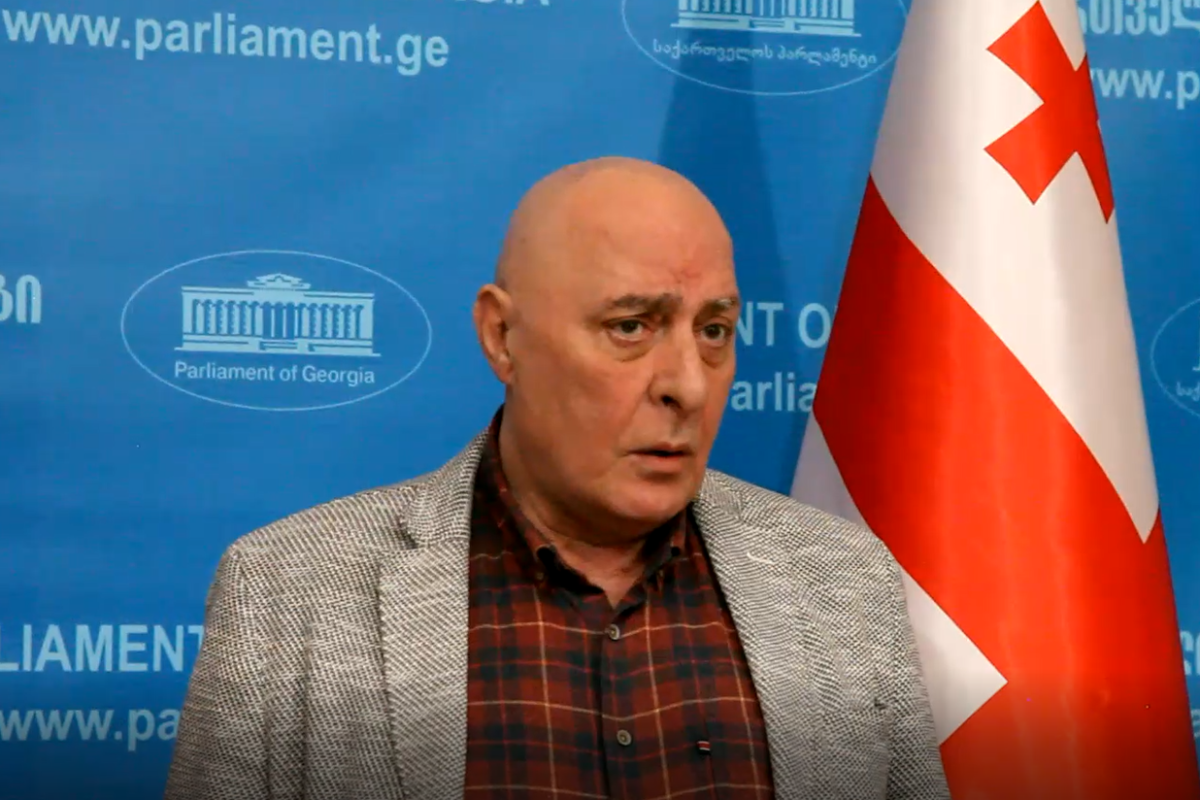 Avtandil Enukidze, Vice-Speaker of the Parliament of Georgia, one of the leaders of the political group "European Socialists", thinks that the statement of the Ukrainian Intelligence Service that smuggling goods through Georgia to the Russian Federation while Ukraine is wanted by the Georgian state is incorrect. Person.
თან Avtandil Enukidze stated about it at the meeting with journalists in the highest legislative body of the country.
. "Why do not you ask questions that Ukraine is in power wanted by the Georgian state. I wonder why this question is not heard by journalists in Georgia? It is a false statement about the smuggling of goods by the Ukrainian authorities when Ukraine has Adeishvili inside the government. "Let them answer us about that."
🔹 “I know friendship is the same. If we are friends, we should be friends in everything, if we are looking for a position. If Saakashvili had not been imprisoned, they would have become president soon. This is the truth. "- said Avtandil Enukidze. 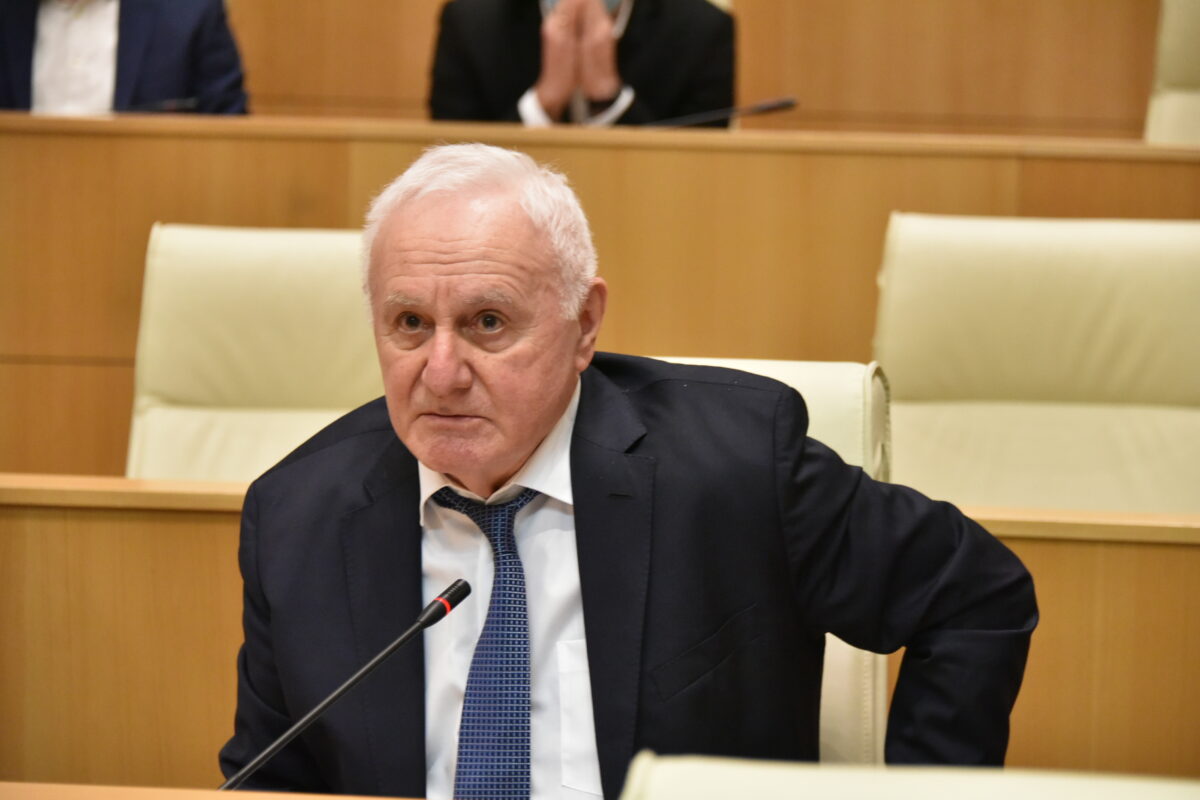 👉 According to the security team of the Ministry of Internal Affairs, one of the foundations for the state is Fridon Eng.
🔹 Chairman of the parliamentary political group "European Socialists" Fridon Injia announced this at the plenary session of the Parliament of Georgia, where they listened to the Minister of Internal Affairs Vakhtang Gomelauri in the "Minister's Hour" format.
🔹 "Due to the fact that your agency includes the Border Protection Department, I believe that the Ministry of Internal Affairs is one of the foundations of security for the state and for the people, I believe that the Ministry of Internal Affairs is the face of the country" - said Fridon Injia.
🔹 The chairman of the political group addressed the Minister of Internal Affairs with the following questions: What is the social package for police officers, how does it correspond to the current situation, and in this regard, is social assistance being adjusted?
🔹 Is there any kind of statistics regarding drug addicts and what is its trend?
🔹 Do you think that there should be an article on defamation, disinformation and treason in the Criminal Code?
🔹 To what extent do you think it is right, based on the fact that you are the secretary and member of the Security Council, it is ordered that a 6-month mandatory conscription in the army be introduced by law, so that no one has any benefits.
🔹 To what extent it will be acceptable and whether it will regulate the current situation or not, I have in mind - alternative ways. In particular, benefits and facts of dismissal from compulsory military service. 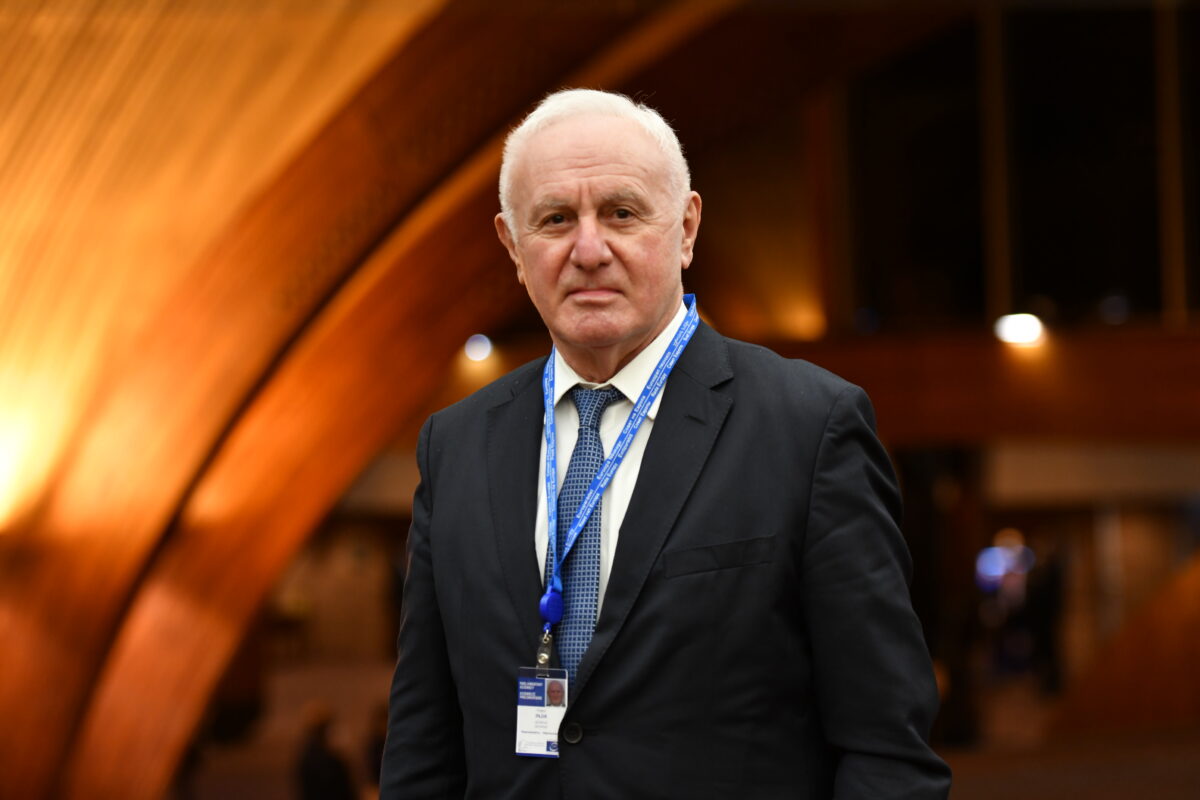 📍 In 2008, Georgian Ambassador to Russia Eros Kitsmarishvili tried to convince Saakashvili to avoid war, but he failed - Fridon Injia

🔹 If it wasn't for Mikheil Saakashvili, Georgia would have avoided war and loss of territories in 2008. The chairman of the parliamentary political group "European Socialists" Fridon Injia stated this on the live broadcast of "Georgian Times" radio, speaking about the recognition of Saakashvili as a victim by the Ukrainian prosecutor's office. According to Fridon Injia, today the topic of Mikheil Saakashvili is raised too much, because he is "the main actor in the disaster that befell Georgia in 2008".

🔹 "We are pushing this issue too much, as far as Saakashvili is concerned. The person who caused the disaster that is present in Georgia in 2008, and he is the main actor. As for whether Ukraine recognized him as a victim or not, before that it was better to see that he is wanted by Georgia, and he was convicted. How is it that they didn't see it and now they see that Saakashvili's rights have been violated? If it is violated, compared to Saakashvili, the rights of 9,500 prisoners have been violated, and no one remembers this. "Today, there is no TV channel that does not ask about Saakashvili's health, what he eats, what he drinks, how he sleeps... This is done by the people who are assigned to do this," said the deputy.

🔹 On the journalist's question - if it wasn't for Saakashvili, the war and the loss of territories would have gone beyond Georgia, Fridon Injia said: "With 1000%! At that time, the Georgian ambassador to Russia was Eros Kitsmarishvili. He arrived in Georgia about 15-20 days before, went to Saakashvili and told him that there is a great danger and we should not dare to do what Saakashvili had in mind. After leaving Saakashvili, he came to me, we were friends recently, we were very close. There were two other people with us, however, I don't want to name their names... Eros Kitsmarishvili was worried, he didn't know what to do, the person was crying and saying that he has decided this way and we will die... This is the first time I am saying this... Well, he was screaming, he is going to do it and I couldn't find anything. He had information, he was an ambassador and possessed information, he came from Moscow to prevent Saakashvili from doing this, but what happened happened." - said Fridon Injia. 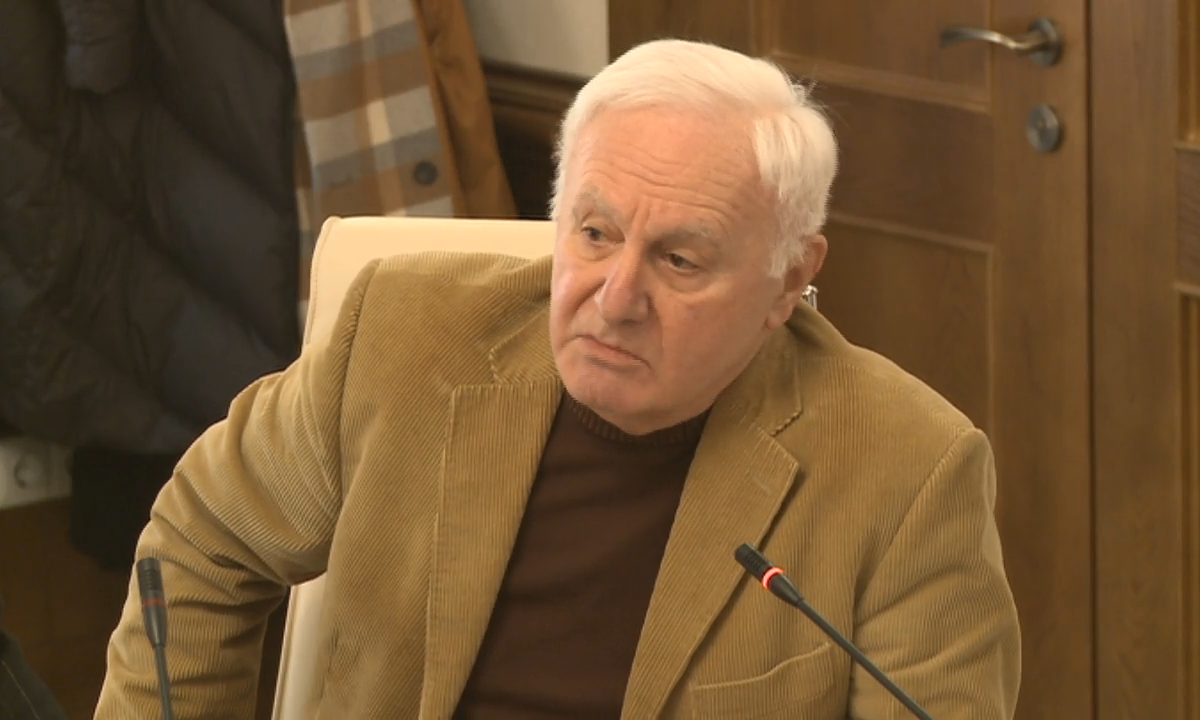 "I have never received or asked for any property for 1 GEL" - Fridon Injia, Chairman of the European Socialists

"I have never received or asked for any property for 1 GEL" - Fridon Injia, Chairman of the European Socialists

Fridon Injia, chairman of the European Socialist parliamentary opposition group, commented on media reports about the property of Mikheil Saakashvili's mother, Giuli Alasania, and his assets on a live broadcast on Radio Georgian Times.

"It was said these days that Alasania was left with property by his grandparents. What did grandparents leave in the Gepei buildings? Gepei buildings are 100 years old, let's say, his grandmother… ie. When the grandmother was born, at the moment what was being built was already owned, how is it? "We are talking about huge property, buildings, tens of thousands of square meters of land, apartments. I do not have so many apartments and for 1 GEL I did not take anything and did not ask for it," said Fridon Injia.

Question: However, the representatives of the "National Movement" repeatedly indicated how to seize the property ..? How did you get rich in the 90s when everyone was in trouble?

- I have nothing privatized, so I left, not a single building was privatized in my biggest ministry at the time, and I did not get rich in the 90s, I was rich even when I became a minister.