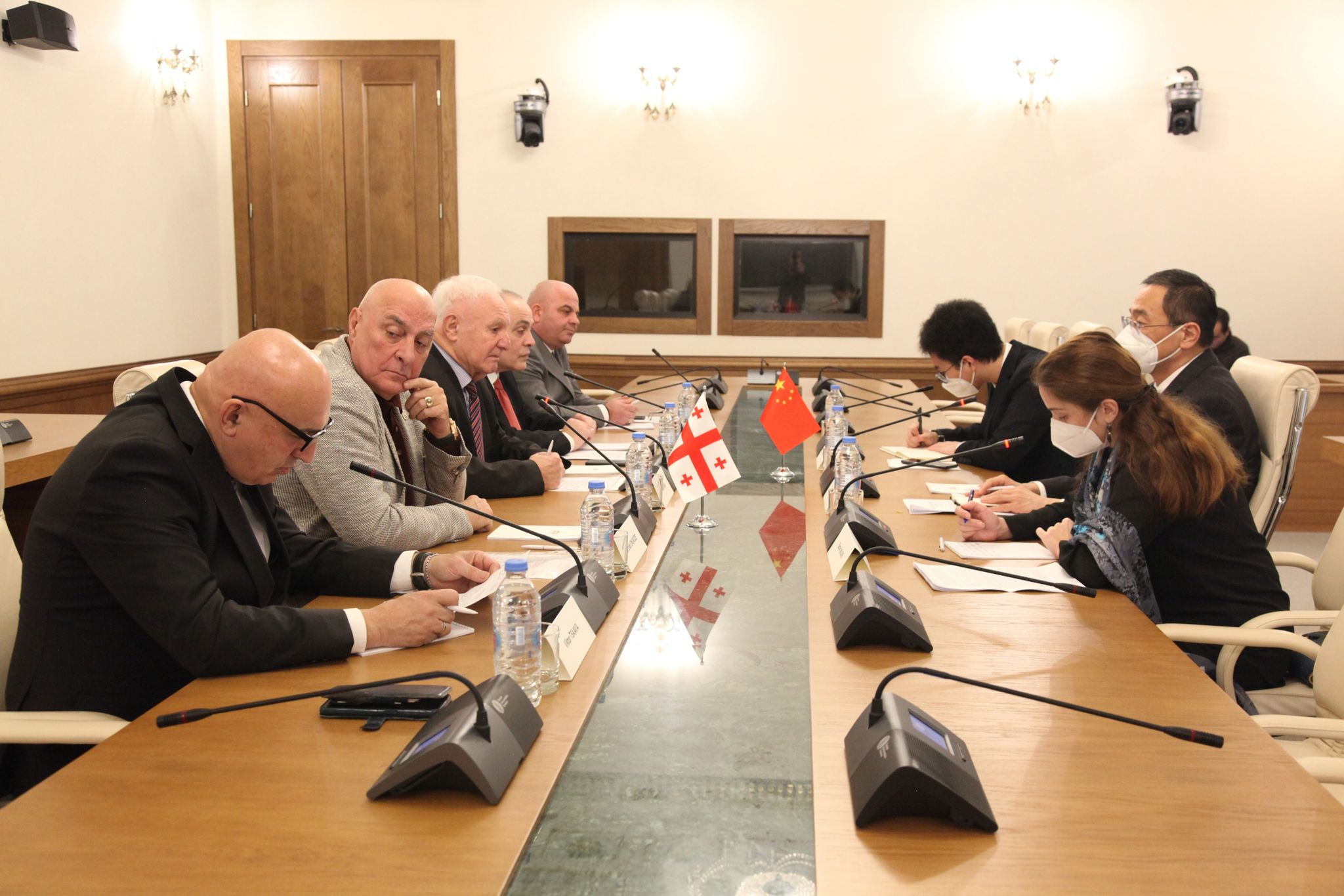 📍 In the highest legislative body of the country, the meeting of the chairman of the parliamentary political group “European Socialists” Fridon Injia, the vice-speaker of the parliament Avtandil Enukidze and the members of the political group was held with the extraordinary and plenipotentiary ambassador of the People’s Republic of China to Georgia H.E. with Zhou Qian.
🔹 Chairman of the political group Fridon Injia met the Ambassador of the People’s Republic of China to Georgia H.E. He congratulated Zhou Qian on holding the 20th Congress of the “Communist Party” of China and thanked him for visiting the parliament.
🔹 “Our party fully shares the concept and the policy of governing the country, which the “Communist Party” of China implements in your state. The experience of the political leadership of the People’s Republic of China in managing the country, which it has accumulated over the years, is truly exemplary and exemplary.” – said Fridon Injia at the meeting.
🔹 The chairman of the political group drew attention to the geopolitical role of Georgia, which today provides the greatest opportunities for the implementation of various important economic projects in Transcaucasia, in particular, such as: energy trains, production of alternative solar energy, aviation or transit traffic, development of sea ports and strengthening of cargo turnover, agriculture Sharing experience in the field, which is part of the “Silk Road” project.
🔹 The chairman of the political group Fridon Injia proposed to the ambassador of the People’s Republic of China that in order to popularize the governance model of the Chinese state, the Chinese model should be introduced in any region, district or district of Georgia and its modernization should be done with the idea of ​​implementing economic or social projects.
🔹 “It would be good to develop a specific plan or concept, necessarily based on democratic principles, which will contribute to the motivation of the population and play an important role in the economic and social development of a particular region,” Fridon Injia noted at the meeting.
🔹 According to the chairman of the political group, it is also important to prepare a memorandum of cooperation in order to deepen the relationship between the two parties, which will contribute to further deepening and strengthening of the relations between the two parties, as well as between the two countries, Georgia-China.
🔹 According to Avtandil Enukidze, the Vice-Speaker of the Parliament, he supports China’s political course and considers it important to strengthen and deepen relations, both at the state level and in terms of close cooperation between the two parties.
🔹 “The mood of our party is very positive in terms of deepening close cooperation with you, and of course we support China’s sovereignty and its development. I have many friendship factors. I cooperate with representatives of diaspora and thank you for this meeting”. – Avtandil Enukidze noted at the meeting.
On his part, the ambassador emphasized the importance of today’s meeting and thanked the chairman of the political group “European Socialists” for organizing the meeting.
🔹 “Recently, the 20th Congress of China ended in China, where the results achieved in the country in recent years were summarized and future plans and tasks were set. I would like to mention that a special report was published at the congress, where the leadership of the “Communist Party” of China thanked the parties of various countries for their cooperation, including your party – the “European Socialists”, the ambassador noted.
🔹 According to the ambassador, this year marks the 30th anniversary of Georgian-Chinese diplomatic relations, and it is welcome that “such a significant anniversary coincided with the period of his ambassadorship”.
🔹 “You know how important it is to develop relations between Georgia and China at the diplomatic and legislative level. Also, it is very important to deepen trade relations between Georgia and China. In this regard, Georgia is one of the strategic partner countries for China. China always supports the independence and sovereignty of Kazakhstan. Georgia occupies a very important geopolitical place, and in this regard, the implementation of strategic projects is very important. It is also important to implement infrastructural projects in the field of logistics, which will greatly improve the direction of logistics in your country.” – said the ambassador.
🔹 At the end of the meeting, the desire for close cooperation was expressed and a specific future work plan was drawn up.