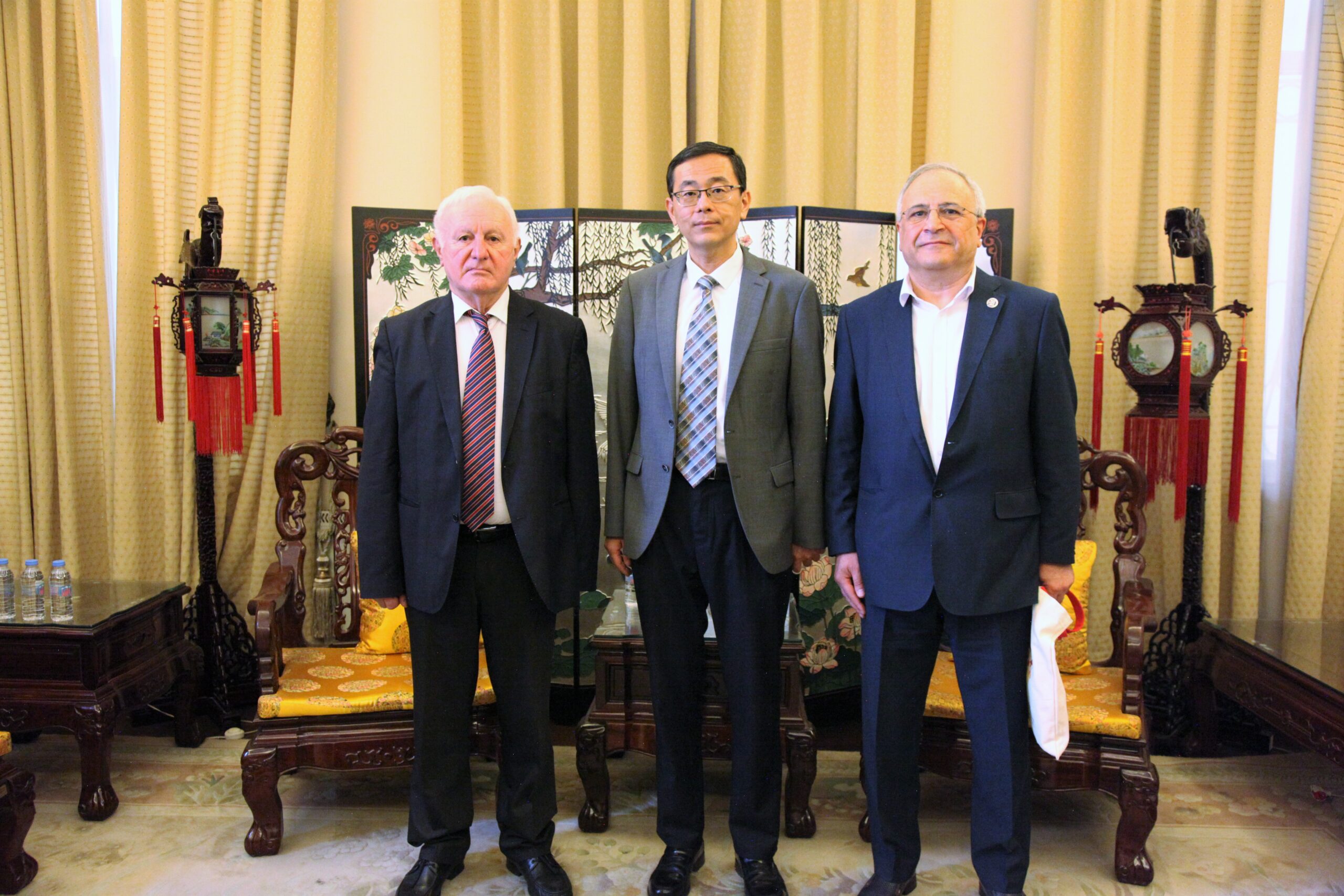 Chairman of the parliamentary political group “European Socialists” Fridon Injia and member of the political group Davit Zilfimiani met with the Extraordinary and Plenipotentiary Ambassador of the People’s Republic of China in Georgia H.E. They will meet Zhou Qian.

The meeting was held at the Embassy of the People’s Republic of China in Georgia at the personal invitation of the ambassador.

Chairman of the political group Fridon Injia thanked the Ambassador Extraordinary and Plenipotentiary of China for the invitation and noted that as the chairman of the “European Socialists” political party, it is a great honor for him to meet the Ambassador Extraordinary and Plenipotentiary of the Chinese people in Georgia, whose efforts and initiatives are aimed at bringing the Georgian and Chinese people closer together and To deepen their friendship.

It is extremely important and noteworthy that the concept and main directions of “European Socialists” are in line with the concept of the ruling party of China, its political-economic course and the main principles already implemented by the country’s government.

At the meeting with the ambassador, the chairman of the political group focused on the basic concept of the “European Socialists” political party, which is focused on solving the country’s social problems.

“Our party was created a year and a half ago, and its main team consists of people with considerable experience. The political party is represented by 4 deputies in the highest legislative body of the country. We took part in the 2021 local self-government elections, where the party did its best, and in one district of Samegrelo, the “European Socialists” party is one of the leading forces, and together with the ruling party, we form the majority. Of course, we are preparing for the 2024 parliamentary elections,” said Fridon Injia.

According to him, the main task and direction of the party is to work on social issues. Therefore, the party has a concept that aims to fight for the welfare of the country’s population. The main goal of the party’s concept is to adopt and implement the laws that are necessary for the well-being of the population, their development, and their social security.

Chairman of the political group Fridon Injia introduced the main aspects of the party’s concept to the Chinese ambassador at the meeting:

• It should be realized that the property of the state is the property of the people and it is inviolable. As a result of a deep study and analysis of the issue, by means of a general public referendum, the concept of an object of strategic importance of Georgia – land, water, natural resources, minerals and others – should be defined and established by law. The income obtained from this should be used for the welfare of the people every year, and not, as now, flow abroad or be transferred to the property of a few dozen people. The state must gradually, through redemption, or, if necessary, by other legal norms, take back all the strategic objects that will be included in this list;

• In order to regulate oligopoly in the banking sector, for free access to monetary and credit services for the population, the state should create a state commercial bank;

• The law on land and natural resources should be significantly changed. First of all, the uncontrolled transfer of agricultural lands should be stopped;

• Fresh water resources should become an object of special protection and control by the state. “If we do not take care of the property and alienate everything recklessly, Georgia will lose its sovereignty, it will turn into a branch of transnational holdings and corporations, which itself is already managed from the outside, and Georgia will remain only a geographical concept”;

• The development of agriculture and processing industry in Georgia should become a priority direction, the state should regulate the production of agricultural products in rural areas and should guarantee the sale of surplus products. It should promote the creation of ecologically clean organic farms in rural areas, which will significantly increase the demand for agricultural products of our country and create additional jobs;

• For the demographic stability and further development of the village, it is necessary to return to the village the surrounding pastures and the surrounding land resources, when making decisions on the transfer of rights to forest, water and fish resources, the state should give priority to the interests of the local population, who have traditionally enjoyed these resources for centuries;

• Health care should be a priority sector of the state, it should be accessible to the population and, basically, free of charge – financed by the state, as in many European countries, the majority of hospitals should be owned by municipalities. In order to provide first aid in all villages, outpatient clinics should be restored;

• The state, on its part, should create pharmaceutical production, which will be a regulatory mechanism for oligopoly, and the population will be able to purchase medicines at an affordable price;

• Pre-school, school and university education should become free – financed by the state. Special attention should be paid to the revival of fundamental science and the development of technological fields;

• Pensioners, disabled persons and veterans should be the subject of special care of the state. Their pension should be determined in the amount that will give them decent living conditions and means of recreation;

• Large families should become the subject of special care and stimulation for the country;

• Energy is the sector that is one of the main determining factors of the future political and economic stability of Georgia, therefore the state should pay special attention to this sector, a greater share of hydroelectric power plants with a capacity of over 10 MW should be owned by the state, which determines their management, technologically basic methods and functions of updating and distribution;

• Monopoly on water, gas and electricity supply should be prevented in the country. The population should be able to choose who to buy it from;

Therefore, Fridon Injia emphasized how important it is to share the experience of the ruling party of the Chinese state in Georgia.

“The approaches and policies of the “Communist Party” of the People’s Republic of China in relation to social issues are significant and noteworthy, sharing and taking into account the experience of which in Georgia will be important for the improvement of the social condition of the country’s population.” – said Fridon Injia.

According to the chairman of the political group, scientific institutions should be restored in the country, as it was in the previous period.

“Historically, Georgia had and still has achievements in the field of science, and this is confirmed by the success of the members of the Georgian national team at the 54th International Chemistry Olympiad (IChO 2022), which was held remotely this year in China. At the Olympics, the Georgian national team was awarded with 1 silver, 2 bronze medals and 1 diploma. It was really an interesting challenge, which is a proud and welcome fact,” said Fridon Injia at the meeting.

Davit Zilfimian said at the meeting that it is important for the Georgian society to know more about the high culture of the People’s Republic of China, one of the leading countries in the world, which has achieved the greatest achievements and successes in the shortest period of time, with the correct economic, social and foreign policy of the ruling party.

“I am the deputy chairman of the Foreign Relations Committee of the Parliament of Georgia and also a member of the Education and Science Committee. Georgia has always been a country with a high scientific potential, which successfully implemented various important scientific projects and was one of the leaders in this regard, and today it still has the opportunity to do so. I would like to assure you that we will contribute as much as possible to the initiation of all those interesting issues and initiatives at the legislative level, which will affect the future relations between Georgia and China,” said Zilfimian.

At the same time, he added that it would be good for the Georgian public to receive more information about the achievements of the People’s Republic of China, the country’s culture, sports, arts and new technologies through mass information, which the team of “European Socialists” will gladly support within its capabilities.

In turn, the Ambassador Extraordinary and Plenipotentiary of the People’s Republic of China H.E. Zhou Qian noted at the meeting that based on the speech of the chairman of the Party of “European Socialists” Friedon Injia, it is worth noting that the “European Socialists” have a lot in common with the “Communist Party” of China, because the “Communist Party” of China is a people-oriented political force.

“The Communist Party of China is the ruling power in the Chinese state and the party has more than 90 million members, and we will be happy to lay the foundation for future cooperation with your party.” Your concept has a lot in common with the concept of our party, where the orientation is directed to social issues. We have socialism and economics with Chinese characteristics.
Economic sectors, health care, energy, most of these sectors are under state control, so that the received incomes can be used by the people. Socialism puts people at the center of attention. Our goal is social protection of people. Therefore, it is significant that 500 million people in China have escaped poverty in recent years, which was confirmed by the United Nations and the World Bank in their conclusions, where it is noted that this is an unprecedented result in the history of mankind,” the ambassador said.

According to him, today the People’s Republic of China is considered a developing state and it faces the task of increasing the gross domestic product per capita of the rest of the regions and cities, and this becomes a prerequisite for the Chinese people to be rich, not the population. Some are rich and some are poor.

According to him, in China, an important emphasis is also placed on the development of high digital technologies.

The ambassador also added that the relationship with Georgia is very important from the point of view of economic relations, especially when today Georgia is one of the most important export partner countries for China.

“The “Communist Party” of China is ready to cooperate with all parties based on the following 4 principles: 1. Independence and sovereignty, 2. Equality 3. Mutual respect 4. Non-interference in domestic affairs,” the ambassador said.

According to him, this is the first step taken on the way of cooperation with the chairman of the party “European Socialists” Fridon Injia and his political team. The Communist Party of China has an international department, and it is quite possible to deepen this cooperation at the parliamentary level. Within the framework of this cooperation, the ambassador did not rule out the official visit of the movement of the party of “European Socialists” to the People’s Republic of China.

In addition, the ambassador drew attention to the 20th Congress of the “Communist Party” of China, which will be held in October this year, which, according to the ambassador, is the most important political event.

“At the 20th Congress of the Communist Party of the People’s Republic of China, the 5-year future plan will be presented, and it will be important for both China and the whole world,” the ambassador said.

At the meeting, both sides expressed their desire to deepen further cooperation.